The yummy taste of feedback

I seriously spent the last two days in self imposed down time at home.  I was feeling rather sick, like some sort of cold or virus or a yucky something.  Or, quite possibly, I was mentally and physically worn out and drained.  I'm not sure what it was, but it doesn't matter.  I do know that I definitely needed to fly off to some tropical island and drink mai tai's on the beach for a week or two, uh, umm, I mean, take a break and rest and nap and eat well and ask for help.  I admit, the situation was rather desperate.

When I asked, my husband gladly took over most of the kid duties without complaint.  Maybe he got a wee bit scared seeing my "crazy" eyes or concerned because of my eye twitch and sleepwalking incidents (let's just say it involved getting out of bed, putting on my pants, and wandering around my room looking for kids to film for my fundraiser project...and that happened repeatedly during the course of one night).  Ya, umm, so...just simply getting a break from making lunches, taking the kids to and from school, helping them with homework, and not being the almighty responsible go-to super person can make all the difference.

So, during my downtime, I watched a lot tv in bed - caught up on some recorded shows, like Intervention (always helps me feel better about my life), How I Met Your Mother (always makes me laugh), and Top Chef for excitement and inspiration.

One of the most interesting elements of Top Chef, besides watching the cooking techniques and skills of the full-of-personality contestants, is the judge's feedback after each challenge.  It can be brutal and blunt or full of praise and applause, but regardless it's pretty darn interesting.  The feedback, either good or bad, gives the Top Chef contestants motivation to improve and keep going, confidence (stroke their already big egos), a reality check, areas to work on, and validation for their efforts and training...and much more.

I can't help but think to myself about whether getting more brutally honest feedback in life, like on Top Chef, would be a good thing or maybe not?  There is always room for improvement, right?  I'm not saying I am desperate for more praise and outside validation.  I know that it has to intrinsically come from within - a sense of personal satisfaction...yada yada yada.  But, sometimes, I don't know, sometimes...I just need a little something from other people to let me know I'm doing alright...or not doing so great. Just something that let's me know that I'm being noticed...and not invisible.

I've actually given constructive criticism that changed people for the better.  I remember my first real boyfriend at sixteen.  Todd was very nice, artistic and kind of dorky, but man, a horrible kisser!  Not that I had tons of experience in this arena (I was shy and picky), but I did have the sense to know if the kissing felt right or not, and his kissing was just bad.  BAD.  When I finally couldn't take it anymore, I said right to his face "You don't know how to kiss!" and broke up with him.  Kinda mean, I know, but I was sixteen after all.  I probably needed some honest feedback about my lack of tact.

Years later at college, I bumped into Todd and do you know what was one of the first things he said?  He said, well, begged "Give me another chance and let me show you I know how to kiss now.  I've been practicing!!"  He was completely serious and sincere, but I could not get away from him fast enough.  Eeeww!

Another time, I once asked a good friend if she realized that whenever we talked, she never asked about me and that all she did was talk about herself?  She never knew she did that.  She actually thanked me months later and said she really took what I said to heart and had made a big effort to be different with all of her relationships.

I've heard plenty of honest feedback about myself through the years.  I remember way back when I was in seventh grade I had my hair really short, like boy-cut short.  One day, this boy I didn't know very well said to me "You'd look better with long hair".  At first I was totally embarrassed, but then I really took a look at myself in the mirror and thought my short hair did look kind of weird.  So, I grew out my hair and do you know what?!  It grew out curly!  I didn't even know I had curly hair (a result of puberty?)...and it was really pretty!  Thank you hairstyle feedback boy!

I've given and received plenty of life changing feedback and constructive criticism, and I do know it can be uncomfortable but sometimes necessary.   And, there's a big difference between complaining and feedback.  I hear complaining all the time, after all, I am a mom.  For example, after watching my son eat his entire dinner, sometimes I hear a whiny "I'M STILL STARVING!!! (so defeating and grating!), but, I'd much rather hear "Mom, can I have more to eat next time because what you gave me just wasn't enough" (informative!).  Maybe there will be a girlfriend in his (very distant!) future that will tell him he needs to learn some tact.

I wonder if I was ever a Top Chef  contestant or on any of those other competition shows with judges, would I be able to handle the brutal honesty?   Would I gracefully thank them for the experience or cry in the limo all the way to the airport?  Yikes, I don't know...and I don't plan on finding out either way.

After catching up on all of those Top Chef episodes and after a totally glorious afternoon nap,  I am feeling more like myself again.  I even decide to attempt making fish soup for dinner.  Why fish soup?  I'm not sure, but it sounds good and I've never made it before so it's adventurous.  I look up "fish soup" recipes online, however many are tomato or cream based, and I want more of a light broth.  So, I throw a bunch of ingredients together and hope for the best.  And, what do you know?  It turns out AMAZING.  Yummmm. 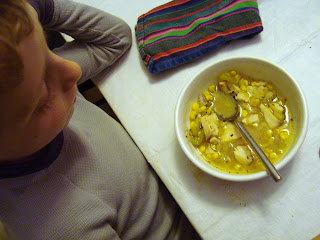 I serve the bowls of fish soup to my kids and husband and happily settle down with my own steamy hot bowl.  Before I can get a spoonful in my mouth, my sweet and wonderful daughter proclaims "Mommy, this is the best soup I've ever had in my whole life!".
Now, I've talked about constructive feedback and how it can be life changing and all, blah blah blah, but her huge compliment feels like a big hug for my soul.  I did something right and I did it great and somebody noticed and I heard it out loud...and...I needed that.

ps...
soup recipe (as best as I can remember)
onions and celery and garlic sauteed in oil
lots of white wine to de-glaze - don't be shy :-)
vegetable broth (TJ's Savory Broth) - 2 packets
add water, corn (a lot), orzo pasta (not too much),
herbs de provence, bay leaf
salt, pepper
cook for a while
then add all of the talapia from a frozen 3-pack package from TJ's - cut into one inch pieces
more salt
cook about 10 minutes or until fish is cooked