Not to butter my own toast, but I can cook up a great morning meal.  Oh ya, I totally rock the breakfast menu.  Helped by two early birds who wake up about 6am EVERY SINGLE DAY regardless of what time they go to bed, I find myself with plenty of time in the morning to make a variety of good warm home-cooked stuff,  I even wrote my first blog post about my fabulous Friday pancakes. 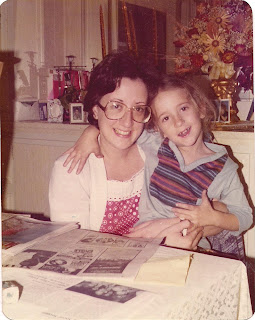 Honestly, I enjoy cooking a nice breakfast for my kids and it's important to me (and their growing bodies) to start their day with healthy satisfying meals, full of variety and flavor.  It's not about being a bragging Super Mom that's trying to be better than anyone or get bonus points.  It's more about being proud that I am able to provide what I didn't necessarily have growing up being raised by a single mom who did the best that she could.


But then there are those mornings.
I'm talking about those occasional mornings about once a week (gasp!!) when I don't want to cook or be creative or do anything for anybody that's more than the bare minimum.  Believe it or not, I get tired and burnt out and cranky and I just don't have it in me.  Or, I simply don't feel like it.  After all, I'm certainly entitled.
So, on those days, I put two bowls, milk, and a banana on the table and inform my young customers that it's a cereal fend-for-yourself kind of breakfast morning - thank you very much for coming and have a have nice day.  My excited daughter runs to the cereal cabinet so she can get there first, choosing her favorite from a variety of different cereals, shakes out the correct nutritional portion into her bowl, pours the perfect amount of milk, gets her own spoon and napkin, and starts eating with smiling pride that she's such a capable independent big kid that can do it all herself.
My son, on the other hand, throws a humongous tantrum full of tears and how can you do this to me and "now my whole day is ruined!!!!" guilt trips like I've just served him his beloved puppy in a bowl.  And, every time he does this for the last few months now, we go through the same banter back and forth with me saying this is what he's getting today, and he says he hates cereal because it's too cold, and then I say that he needs to be more grateful and just eat it, and comes back with more pathetic tears, until eventually he gives in and eats the cereal under protest.  There is no glorious victory here.  It sucks.
Yesterday's cereal tantrum was the last straw.  I mean it was soooo off the charts ridiculous.  It took all my will not to yell back at him "What?!  Seriously?!  You ungrateful spoiled rotten !@#$*! how dare you give me so much sh#!@ over this g#*^%! cereal you have no idea how good you have it!!!!".   Of course I didn't say that, but it was so damn tempting!  When it comes down to it, it's not about being a martyr or doormat mom - it's about feeling under appreciated, taken for granted, and frustrated.  So, instead of causing an even bigger scene, I keep my feelings to myself, fester about it all day, and eventually (after two glasses of wine and four cookies) craft my genius master plan - Operation Cereal Busters.
So the next morning, while he is happily eating his banana blueberry chocolate chip walnut Friday pancakes, I sit down and look at him in the eyes and say we need to discuss the issue of The Cereal.  I calmly explain there will be no more tantrums over cereal and it is no longer acceptable to act the way he does.  Ever.  I go on to say that while I love cooking for them because I'm so good at it and modest (just kidding!), but sometimes I just need a break.  Besides, cereal is not a bad thing at all.  Most people love cereal and up until a few months ago he did, too.  And, does he know that most days growing up, I had to make my own breakfast and it was almost always cereal and sometimes there was no milk and I had to eat it dry or use orange juice or apple juice and I would've never ever thrown the kind of fit that he does because I was grateful for what I got because I knew there wasn't much money and if I got anything else other than cereal it was a special treat?  And if he ever gets mad over cereal again, then he will have it the next day, and the next day, and the next day after that until he gets a grip. 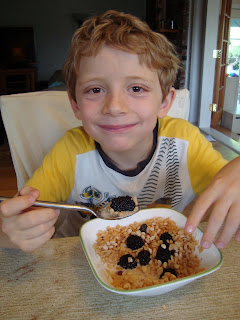 And you know what?  He took me seriously.  I'm pretty sure he got it.  He promised to change his behavior in the future.  As a bonus, he was an extra happy kid the rest of the day.  I honestly don't expect another cereal tantrum again.  So ya, I realize that I pulled a story from my childhood, much like the typical "I used to walk ten miles to school up a hill in the rain/sleet/snow" story with the intention of being humbling.  But, in my mind, I appealed to him as a human being with feelings, brought him down a notch, made clear boundaries, and took back control.  My only regret is that I didn't do it sooner.
I'll keep making nice breakfasts because I enjoy doing that, but I might just give myself more of a break and let my kids fix themselves some extra cereal days in between.  We all benefit.  I think they'll survive, I know I did.
***picture is of me at age six with my very own mom
Posted by Daria